On Tuesday 11 June, éirígí Dublin Northeast activists took part in the second day of a community organised protest on the Kilbarron Road, Coolock.

The protest was organised by the locals of the Kilbarron Road because of the amount of cars parked in their cul-de-sac. The majority of these cars parked are from the staff of nearby Beaumount Hospital. The residents formed a human blockade at 6.30am with posters declaring “No Parking Here” making sure the area was clear and accessible for emergency services and parking for the locals. 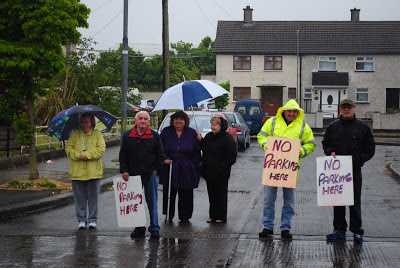 Beaumount Hospital offers parking but at a price, the problem the residents have is the shear amount of cars parking in the cul-de-sac it is hard to get in and out in a case of emergencies. Recently in one incident refuse workers refused to go into the cul-de-sac because of the lack of space for their vehicle.
Obviously we can understand the refusal by members of staff to pay for parking but parking off the Kilbarron Road is no longer an option and the residents have vowed to stop it because it has now reached dangerous levels. 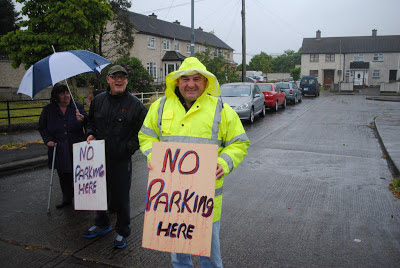 Éirígí Dublin Northeast representative Ciaran Heaphey, who attended the protest said: ''I can understand the residents' anger on this issue. I have seen personally the amount of space taken up in the mornings by the Hospital staff and I believe it could endanger locals if there was an accident or emergency. I was delighted to join the local community and we in éirígí will continue to highlight the issue.''