On Saturday the 1st of June, up to 15 members of éirígí Dublin Northeast gathered to deliver our local information leaflet to the residents in the Ardmore estate.

The leaflet titled “Election promises abandoned in Coolock” Highlights the failure of elected government politicians like Fine Gael’s Terence Flanagan to live up to their promises to the people of the greater Coolock area. The leaflet drop was received well as many residents stopped éirígí activists to have a chat about the leaflet and their general concerns. Unsurprisingly it looks like these particular career politicians have followed suit of a long list before hand that have and will say anything to convince the electorate to get them into Leinster house. It is now time for a change and for genuine working class people to have their own say and empower themselves rather than voting for these puppets of the state. 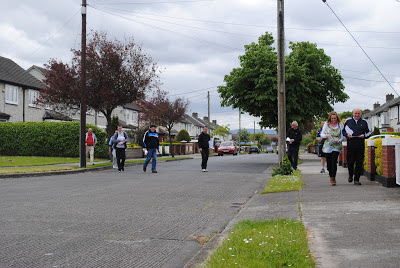 Commenting from Coolock, éirígí Dublin Northeast spokesperson Ciaran Heaphey said “I am not one bit surprised of the actions of the Labour and Fine Gael politicians in their blatant lies to the local people, They join the majority of other government TD’s around the state who betray the people after being elected to gain a handy wage for themselves from the tax payer. “

He continued “I think this leaflet is just a small step to raising awareness of the lies told by the politicians to gain their handy salary after being put in government. I think it is time for the community to question their elected reps, ask them why they have not delivered the changes they ensured the people they would. I believe here at éirígí we are fighting for change and fighting to empower local communities, I would ask anybody who wants to fightback aswell to come and join éírígí in Dublin Northeast.”
at 7:57 AM