A local meeting aimed at giving residents an update on recent local issues has been organised by local éirígí representative Ciaran Heaphey. The meeting will take place in the Kilmore West Community Centre on 30th October starting at 7.30pm. The speakers on the night will include éirígí Dublin Northeast spokesperson Ciaran Heaphey and local residents. The meeting will serve as a platform to explain the progress made into local issues including home burglaries in the area. The meeting will also give an update on the future in resisting the water tax. 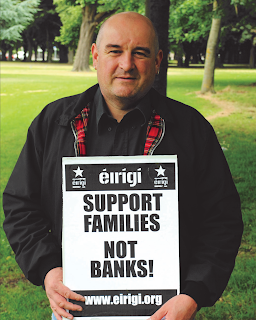 Update on Burglaries
After a huge spike in home burglaries in the greater Kilmore area the local community have decided enough is enough and began to organise to begin tackling the issue. A protest was recently held at Santry station protesting the poor Garda response to the criminal activity and successfully got a meeting with Gardai. Other residents have begun a local neighbourhood watch scheme. Full update at meeting.
Water Tax
The water tax installation point is fast approaching for the people of Dublin Northeast. The only successful way to defeat this outrageous charge is to mobilise locally to have a united community front ready to resist the water tax. éirígí have held a successful meeting on the topic in September attended by near 80 residents and are now looking at taking the next steps of growing a strong community alliance intent on smashing the water tax.

The local meeting on the 30th October is a chance to continue the momentum against austerity at a grassroots level. éirígí Dublin Northeast spokesperson, commenting on the upcoming meeting Ciaran Heaphey said: “It is a time for the residents to take a stand against the crippling policies being pushed upon on them by the government in Leinster House who continue to attack the most vulnerable in society in particular with the upcoming water tax. It also gives the local community a chance to talk about local issues of concern to them and speak of any progress being made to stop certain problems they face.”
at 8:07 AM